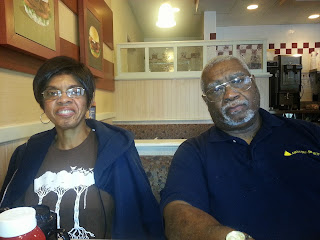 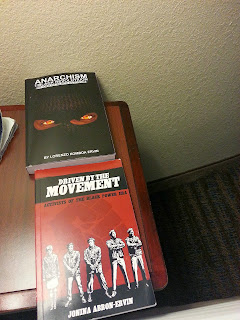 (Books: Anarchism and the Black Revolution by Lorenzo Komboa Ervin and Driven by the Movement: Activists of the Black Power Era by JoNina Abron-Ervin)

On September 20th, 2013 I met with elders and OG's (original guerrillas) :) Lorenzo Komboa Ervin and his comrade/wife Jonina Abron-Ervin in Memphis, Tennessee.  We talked, they taught me about the struggle in Memphis and the role and vision of the Black Autonomy Federation.  As well as their history from the Black Panther Party to today, as revolutionary community organizers, and Lorenzo as a Black Anarchist.

Lorenzo and JoNina explained the importance of generational struggle... as in the Black Panther Party Free Breakfast Program, how feeding children was a threat, because not only was the BPP meeting a basic need of the people in the community but building future fighters and members of the BPP.

We also talked about the importance of building unity, solidarity and mutual aid inter-regionally with communities building and fighting for autonomy and freedom, and hope to continue to build alliances around these ideas and practice.

"Lorenzo Kom'boa Ervin (born 1947) is [a] writer, activist, and black anarchist. He is a former member of the Black Panther Party. He was born in Chattanooga, Tennessee, and has lived in Memphis, Tennessee, since 2010.

In February 1969, Ervin hijacked a plane to Cuba to evade prosecution for allegedly trying to kill a Ku Klux Klan leader. While in Cuba and Czechoslovakia, Ervin became disillusioned with state socialism. After several unsuccessful attempts, the American government eventually extradited Ervin and brought him to the U.S. to face trial. Ervin was convicted and sentenced to life imprisonment.

Ervin first learned about anarchism while in prison in the late 1970s. He read numerous anarchist books, and his case was adopted by the Anarchist Black Cross, a political prisoner support organization. While in prison, Ervin wrote several anarchist pamphlets, including Anarchism and the Black Revolution, which has been reprinted many times and may be his best-known work.

Eventually, Ervin's legal challenges and an international campaign led to his release from prison after 15 years."

A retired Western Michigan University associate professor of communication, JoNina has published essays in such books as Voices from the Underground: Insider Histories of the Vietnam Era Underground Press and The Black Panther Party [Reconsidered]. She lives in Memphis, Tennessee."

I recorded brief video interviews, but due to what I was using to film, I wasn't able to capture the entire interview or edit the video yet.  In the video interview Lorenzo and JoNina talked about their revolutionary community organizing in Memphis and the Black Autonomy Federation as well as the praxis of Black Anarchism.


What is the Let’s Organize the ‘Hood--Black Autonomy Federation?

The ideas of the present Let’s Organize the ‘Hood--Black Autonomy Federation (BAF) go back to 1994, when the Black Autonomy Collective was created in Atlanta, Ga., by seven black college students and five community activists. The collective soon spread to ten other cities in the U.S. and Canada and eventually involved several hundred people.

All members work in their local chapters. The larger federation helps us to coordinate widespread strategy and tactics with each other and the people in each community in which we work.

1. We are advocates for black revolution worldwide.

Unlike some other activist groups on the scene today, we are not satisfied with fighting for hand-outs or reforms. We don’t believe that African and non-white workers in the U.S. or anywhere in the world will receive their freedom under capitalism. We work toward building a social and economic system in which all land and machinery is held in common and all goods and services are produced and distributed based on the needs of the community--not the profits of a boss, corporation or “socialist” state. We utilize many methods to achieve this end while at the same time defending the minimal rights of workers and poor people.

2. We are opposed to politicians.

We believe in the total liberation of all people from all oppressive social conditions in work places, in schools, in the ‘hood, and in our cities. Not only do we fight against the oppression of the black community by the white power structure and those who support it, but also against the oppression of governments over people. It is for these reasons that we see no good in government. It is the government which is keeping us in prison and in poverty.

Poor and working class people are capable of running our own affairs. No so-called “leader” or politician has superior knowledge over us or anyone else. Our opposition to authority is what we call the philosophy of Black Autonomy, which guides our thoughts and actions.

We believe that it is black poor and working class people who have nothing to lose and who can change things--not middle class leaders or politicians. The Black Autonomy Federation is a black working class and poor people’s organization. We work toward building a society run by today’s “homeless,” “pimps,” “whores,” “gangstas,” “welfare moms,” “low income elderly,” “laborers,” “at-risk youth,” and “permanently unemployed”-- basically anyone who does not benefit from living in the so-called “land of the free.”

The Memphis Black Autonomy Federation is open to all people of African descent.