Dialogue and Update on Indigenous Resistance and Land Defense

https://www.facebook.com/events/616718255048910/?ref_newsfeed_story_type=regularDialogue, Strategy Session and Update on the Indigenous Resistance and Land (Water, Air, Life) Defense Struggle with warrior Kanahus Pellkey.Update on the resistance to colonialism and attacks to Mother Earth (like the Keystone XL Pipeline, Fracking, Kinder Morgan Trans Mountain Pipeline, Imperial Metals Lead and Zinc Mine) and support to Mi'kmaq warriors and political prisoners.

KANAHUS PELLKEY
Kanahus Pellkey is a Secwepemc and Ktnuxa warrior and spokesperson for the Secwepemc chapter of the Native Youth Movement. Kanahus is a mother of four, and has been a main organizer with the NYM in their campaign to stop the Sun Peaks ski resort from expanding further into their traditional territory, as well as their campaign to stop the 2010 winter Olympics in British Columbia. She has also written for the book Igniting a Revolution: Voices in Defence of the Earth.

Starting from BC kkkanada down to occupied LA and Arizona.

Neskonlith, Friday, May 2, Kamloops Sat. May 3
Vancouver Friday May 9 and Seattle May 10th

Afro-Taino/Borikwa by way of the Bronx and occupied Puerto Rico, MC and agitator, Not4Prophet, of X-Vandals (X-Vandals.com) and the AGIT Army (Agitarmy.org). Not4Prophet is on a West Coast speaking/reading/performing tour supporting the release of his new book of poetry, Last of the Po Ricans y Otros Afro Artifacts. Not4Prophet will also be conducting workshop on the use of music/art as a form of education/outreach/inspiration/resistance and movement building.

Ant Loc is Nəxʷsƛ̕áy̕əm̕ and a member of the controversial and influential Indigenous hip hop/rap group Savage Family Seowa. He is from the illegally occupied territory now known as washington. His music is rooted in and influenced by the many lives that he has been touched by. His voice represents that of the oppressed, the have nots, the poor and unfortunate and the unmentionables of society. His gritty lyrical ability was forged in the streets and found further strength in the spiritual/cultural foundations of his ancestors.. He spits in an intelligent and precise manner that is rivaled by few. Ant Loc is mostly unheard of as of yet outside of Indigenous/Native communities but is now prepared to share the music that fulfills the prophecies of his people that will make the cities crumble.

These artists are revolutionary artists, that use art to continue to build movement and solidarity across all sectors. To educate and inform, to fight oppression and stand up for our rights, to inspire and fight back. To remember the importance of our planet and water. It is up to us to create a vision for our future.

We are looking for communities and organizations willing to sponsor this tour. To collaborate with you and your communities to take the opportunity to work together while there are amazing artists touring the West Coast. We are currently looking for funds to help cover the travel costs and overall logistical tour costs, plus an honorarium to the artists.

Tentative Dates from Late April to May.

To organize a stop in your city contact:
Joaquin
joquincienfuegos@gmail.com

(In some cities: Performance also from Savage Family, native ancestry from northern Washington state. Also amazing lyrically, using hip hop to speak the truth about the reality of the Indigenous struggles and movement to defend lands and water and way of life).
Posted by Joaquin Cienfuegos at 12:55 AM No comments:

Posted by Joaquin Cienfuegos at 12:18 AM No comments: 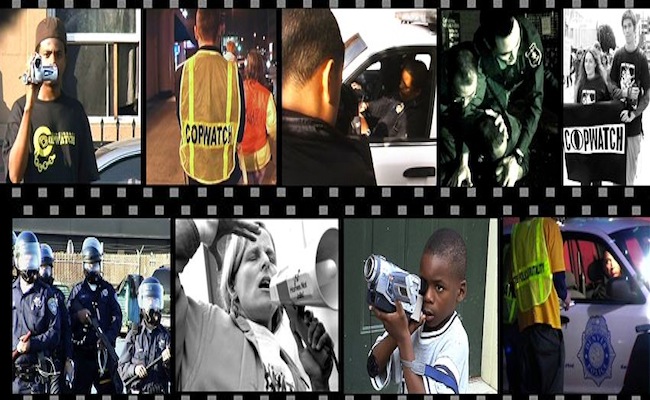 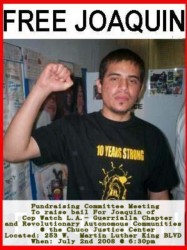 Flyer from a fundraiser to free Joaquin Ceinfuegos, the founder of Copwatch LA, from jail | Photo Courtesy of Copwatch LA
What is Cop Watch LA’s purpose?  According to our mission statement,”CWLA is a program, coalition, and network dedicated to the struggle that will end police terrorism through collecting information on and observing police activity, by offering support to those caught in the criminal injustice system, fighting for change without a reformist consciousness, and working side-by-side with oppressed communities*, and grassroots organizations to create revolutionary alternatives to policing, prisons, and all systems of domination, oppression and exploitation by building healthy, safe, and liberated communities.”
(*We see the most ‘oppressed communities’ as working class and unemployed peoples of color (third world, undocumented, immigrants, citizens, etc.), especially women, queer and transgendered folks, youth, people with disabilities, and so fourth. We organize honoring the movements of the most oppressed and demand that those of us with privileges struggle as allies, not leadership!)
When was the CWLA founded?
On July 11th, 2005 the Los Angeles Police Department murdered 19 month-old Suzie Lopez Pena in Watts, California. At the time the Los Angeles Chapter of the Southern California Anarchist Federation (SCAF-LA) was organizing and holding meetings in South Central Los Angeles at Chuco’s Justice Center, a community center that houses the offices of the Youth Justice Coalition, Critical Resistance, and the October 22nd Coalition to Stop Police Brutality. In response to the Pena murder and the recent LAPD murders of Devin Brown, Deandre Brunston, and Gonzalo Martinez, SCAF-LA joined the “Stop Terrorism and Oppression by the Police Coalition,” out of which Cop Watch LA was born.
Video Courtesy of Copwatch Los Angeles 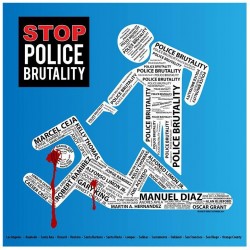 Copwatch Poster | Photo Courtesy of Copwatch LA
Which areas does CWLA serve?  Our chapter is based out of South Central Los Angeles.
What services does CWLA provide?
CWLA’s goals are to…
What are CWLA’s recent accomplishments?  We had a recent training and gathering where Cop Watch Organizations from all over Southern California came together. We are linking up to build an organized movement all over So Cal to fight and put an end once and for all to police terrorism.
In which areas could CWLA use volunteers?  CWLA is a grassroots organization, we are all volunteer-run.  The goal is to create Cop Watch communities where we encourage people to take direct action when they see police brutality and harassment.
Contact info:  copwatchla@riseup.net
Facebook: facebook.com/copwatch.losangeles
Website: www.copwatchlosangeles.blogspot.com
Blog: joaquincienfuegos.blogspot.com
- See more at: http://intersectionssouthla.org/story/nonprofit-spotlight-cop-watch-los-angeles-cwla/#sthash.XGYmsviW.UybFPnNL.dpuf
Posted by Joaquin Cienfuegos at 5:39 PM 1 comment:


Warriors and warrior societies have a sacred and powerful place in Indigenous culture and resistance. While colonial culture has and continues to undermine and deride the role and reality of Indigenous warriors, warrior societies have continued to form and function in order to resist the destructive and dangerous effects of occupation and settler-colonial culture. Sakej Ward sits down with Radio-BED for a conversation on the contemporary warrior and warrior societies, so leave your stereotypes at the door and pay attention. This is serious.


https://soundcloud.com/radio-bed/on-settlers-occupiers-and
Posted by Joaquin Cienfuegos at 7:36 PM No comments: