An Armed People in Mexico and Their Threat to the State

An Armed People in Mexico and Their Threat to the State 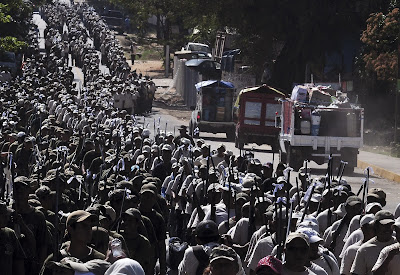 The current situation in Mexico is tense, one that has put social movements and the people in general on one side, and the government and other organized criminals on the other. The Mexican government has shown over and over where their true interests lie, the people are not only fending for themselves but building on the possibility for a much larger struggle to take place in Mexico.

In Mexico where the government has passed 'reforms' that benefit capitalist interests and neo-liberalism, along with other organized crime cartels, the local police and the military have terrorized communities throughout Mexico and indigenous people in particular, one can get a sense that the people have had enough. There has been a resurgence of social movements throughout led by students and teachers (http://www.youtube.com/watch?v=X7ydRS9G56Y - Interview with member of the Seccion XXII – Teacher's Union Oaxacan Section) to combat some of the privatization that is coming from imperialist countries like the U.S. and Canada, and their puppet Pena Nieto PRI regime. There have always been armed resistance movements in Mexico, the Ejercito Zapatista de Liberacion Nacional, and other guerillas who have also openly declared war against the government (http://www.signalfire.org/?p=26168)

Along with these movements, communities, and in particular indigenous communities, have taken upon themselves to arm and defend themselves against not only the cartels, but local police and local politicians who not only work with the cartels, but have proven to be on their side and really one and the same. In some cases as in the Purepecha indigenous community of Cheran, Michoacan, the people rose up to drive out the local police and politicians and reinstate their indigenous model of self-organization and self-defense (for further reading http://elenemigocomun.net/2013/01/self-determination-defense-cheran/).

The self-defense groups have been organizing themselves--and have seized towns throughout Mexico in over 11 states--to fight against cartels like the Knights Templar in Michoacan under the umbrella of the Consejo de Autodefensas Unidas de Michoacan (Council ofUnited Self-Defense Groups of Michoacan). The Mexican government just sent their military to disarm them in Parácuaro , according to reports shooting 7-12 and killing 4 people, including an 11 year old girl, only to later return their weapons due to public pressure. People from Parácuaro came out to the main road to confront the military with sticks and stones, which forced them to return the weapons to the Autodefensas (Self-defense Groups).

The Mexican government definitely understands the situation and sees an armed and self-organized people as a threat, but understands there will be political consequences. The self-defense groups know very well what they are fighting for and what side the government is on; after the clash between them and the military, the spokesperson for el Consejo de Autodefensas Unidas de Michoacán was quoted saying "What we are doing is fighting for the freedom of our families... the people don't trust the government...there are sectors of the government working with organized crime... We are never going to lay down our arms or sit down to negotiate until they stop the criminals.” (http://aristeguinoticias.com/1401/mexico/el-ejercito-rafagueo-a-nuestro-pueblo-autodefensas-en-michoacan/).”

The military by attacking the Autodefensas shows what side they're on and shows that not only are they protecting the Knights, but an armed people pose a bigger threat to their power; they are not trying to combat 'organized crime' at all, because they are the criminals who benefit from the 'drug war'. People having autonomy, self-organization, and self-determination of their own communities exposes the illegitimacy of their neo-colonial government, so they will not only try to disarm them, but destroy them. The state does not care about the people dying in the first place, that is why communities saw that there was a need to come together but not only that they understand their movement is part of a larger struggle in Mexico,

“We are simply not just a group of armed persons, we are a people, we are thousands, We are a CONSEJO DE AUTODEFENSAS DE MICHOACAN, formed by small businessmen and women, farmers... students, parents... we are a people united, and we all will participate,”

Where they now control 14 municipalities and 67 towns in Michoacan. Having a defense for your community, is something indigenous people have always done, these warrior societies and organizations have always existed and do to this day. What Mexico needs is a revolution... an armed and organized people is the first step.
Posted by Joaquin Cienfuegos at 12:14 AM