Sakej Ward (Warrior Alliance) Speaking Tour - Dialogue and Strategy Building: What are Warrior Societies and Their Role in Liberation and against Colonialism


Dialogue and Strategy Building: What are Warrior Societies and Their Role in Liberation and against Colonialism

Sakej Ward - Warrior Alliance -  Speaking Tour
http://igg.me/p/804151/x/7144894
Sakej (James Ward) belongs to the wolf clan. He is Mi’kmaw (Mi’kmaq Nation) from the community of Esgenoopetitj (Burnt Church First Nation, New Brunswick). He is the father of nine children, four grandchildren and a caregiver for one. He resides in Shxw’owhamel First Nation with his wife Melody Andrews and their children.

Sakej is a veteran of both the Canadian and American militaries. During his military career, he volunteered and excelled at some of the most demanding leadership courses in the military, including the Special Forces Infantry Leader’s Course. He finished his military career at the rank of Sergeant.

Wanting to pursue academics, he immediately went to university and immersed himself in politics where he graduated from the University of New Brunswick from the Honour’s program with a Bachelor’s Degree in Political Science with a specialization in International Relations.

Recognizing the value of an academic background, he continued to advance his studies and attended the University of Victoria where he successfully completed the Master’s of Arts Degree in Indigenous Governance.

Sakej has a long history of advocating and protecting First Nations inherent responsibilities and freedoms, having spent the last 21 years fighting the government and industry. This deep desire to bring justice to all Indigenous people has given Sakej experience in international relations where he spoke on behalf of the Mi’kmaq Nation at the United Nations Working Group for Indigenous Populations (WGIP). For his efforts in protecting Indigenous people, freedoms and territory he has received the National Aboriginal Achievement Award.

Having taught, organized, advised and led various warrior societies from all over Turtle Island down into Guatemala and Borike (Puerto Rico) Sakej has made warrior-hood his way of life. He has been on over a dozen warrior operations and countless protest actions. He dedicates all his time to developing warrior teachings and instructing warrior societies from all over.

We are putting out a call to schools, communities, and organizations, who would like to invite Sakej to build, dialogue, and strategize with him. The tour will be through out Southern California, for the Fall, early September, but we want to begin organizing now for the speaking tour.  We are living in a time that is critical, and we have a responsibility to defend Mother Earth, all life, water, and our way of life.  From Alaska to Argentina (and all over the world where people are fighting against colonialism) we are fighting for the same things: water, life, land and liberty. We have a common enemy who is destroying any possibility for a future on this planet.

We need a movement.  Lets dialogue and strategize with each other on how we can do this. 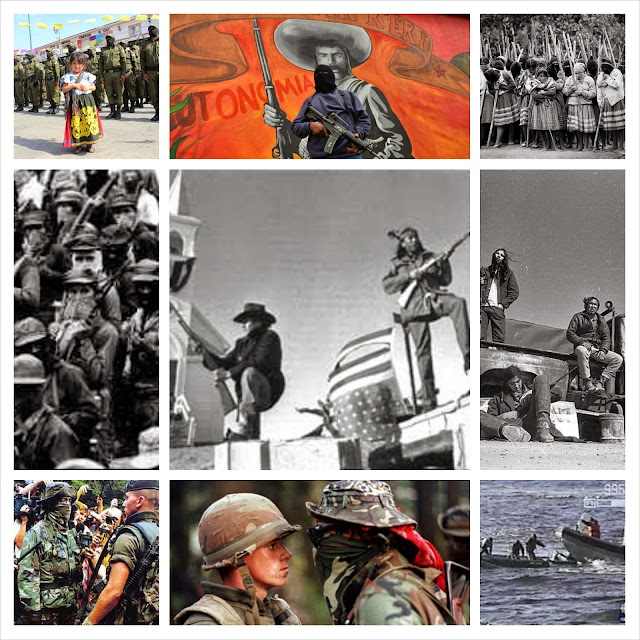 They call living off the land and building your skill-set, survival preparedness, but to me that is life preparedness. Surival is the only thing we can have in the cities under this system, we will live our lifes only when we take back our different lands on this continent and build autonomy.

Posted by Joaquin Cienfuegos at 9:26 PM No comments: